The Saline Valley Salt Works Saline Valley lies in the geological basin and range regions of the western United States desert region. It is adjacent to Death Valley and Panamint Valley. And like its neighboring valleys, it stretches almost due North-South, and contains a large dry lake bed where there is always some water. The salt lake in Saline Valley was recognized by late 19th Century prospectors as a source of sodium chloride and borax. Borax was discovered in Saline Valley in 1874. Salt was mined on a small scale some years before that date. Salt mining became a large-scale operation after 1903. The vast beds of pure grade salt in Saline Valley were passed over by miners as they rushed through the valley seeking their fortunes in the yellow ore they would eventually find in the nearby mountains.

The Saline Valley cable tramway was constructed between 1910 and 1913 by the Saline Valley Salt Works to transport pure salt deposits from the salt lake in Saline Valley across the Inyo Mountains to Owens Valley. There it was milled and shipped via the Carson & Colorado narrow gauge railroad north to Nevada. Gondola cars carrying 800 pounds of salt, traversed the 13.5 mile long series of tramways at a rate of 20 tons per hour over the Inyo Mountains. A total of 30,000 tons of high grade salt was carried over the tramway on and off through the early 1930. The main salt tram summit control station straddles the crest of the Inyo Mountains. It once was totally enclosed with metal siding. A unique crossover system allowed the gondolas to go from one tramway to the other without stopping. Electricity was provided by the Edison Power Plant located in Cottonwood Canyon in the Sierra Nevada Mountains on the western side of Owens Valley. Salt tram towers can be seen from the Swansea Grade on the west side of the Inyo Mountains. No two towers are exactly alike. Before the salt could be transported on the tramway, it had to be harvested from the Saline Valley lake bed. Fresh water was pumped from a large spring into shallow ponds that were built on the lake bed. As the water evaporated, the salt crystals that remained were raked into piles. The salt was then shoveled into wooden railway cars that were pulled into a large storage hopper, where tramway gondolas automatically were loaded with salt. The unique system was capable of Saline Valley Salt Works filling 56 gondolas per hour, or 20-24 tons per hour. As many as 40 – 60 men were employed at the salt tram, enduring summer temperatures which could reach as high as 120 degrees. After traversing the Inyo Mountains, the gondolas ended up at Owens Lake, northwest of Swansea adjacent to a Carson and Colorado Railroad siding. Here the salt was dried, screened, and prepped before railroad shipment. The first buckets of salt reached the Owens Lake railhead on July 2, 1913.The Worlds Purest Salt was endlessly transported over the tramway for seven years. The tram had a refrigerator gondola that was kept cool with ice. The refrigerated gondola provided fresh meat and vegetables twice a week to the men working at the Salt Works in Saline Valley. Dried beans, cereals, and other staples kept the men satiated in between time. The gondolas of the salt tram were comfortable for the men to ride in. Two men at a time could sit inside, facing each other. The bottom of the buckets had drain holes on them and a line of salt could be seen on the ground beneath the tram line. The ride on the tram must have been daunting. As they traversed over Daisy Canyon, the men could see cars lying on the canyon floor. They would look up ahead and wonder when the next bucket would break loose, and come back to smack them. The high cost of the construction and maintenance of the great tramway over the Inyo Mountains prevented salt mining from being a profitable venture. Much of the equipment the salt company used had rawhide gears that failed often and needed to be replaced. The tramway operated from 1913 to 1918, again between 1920-21, and later in 1929 and 1936. Ownership changed hands on and off until the great depression hit and the gondolas stopped forever. The remains of the towers can be seen here and there as you travel the Swansea Grade today. The tramway was a remarkable engineering feat perhaps rivaling even the Los Angeles Aqueduct which stretches from Mono Lake to Los Angeles. It was the steepest tramway in the United States, rising from 1100 feet in the Saline Valley floor to 8500 feet at the crest of the Inyo Mountains, then dropping to 3600 feet at Swansea in Owens Valley. Materials for dozens of towers were packed in by mule and the towers were built by hand. Salt was the only food preservative in use at the time, and government price supports helped keep the operation afloat. Saline Valley Salt Works.  The Saline Valley Salt Tram is claimed to be “the most scenic, historic, best preserved, oldest, and largest of its kind remaining today.” Although most the Saline Valley Salt Works in the floor of the Saline Valley have been carted off or burned for firewood by vandals, the summit structure on the crest of the Inyo Mountains is extremely difficult of access, and remains largely intact, together with the adjacent living quarters for the machinery operators. Many of the connecting tram towers located in the Inyos are also largely intact. The Summit Control Station and Power House can be seen at the top of Daisy Canyon northwest of Cerro Gordo ghost town. The control operator’s house has been restored, and is a pleasant spot for modern back country travelers to pause for a picnic and ponder over the construction of the great salt Tram

How to Get There 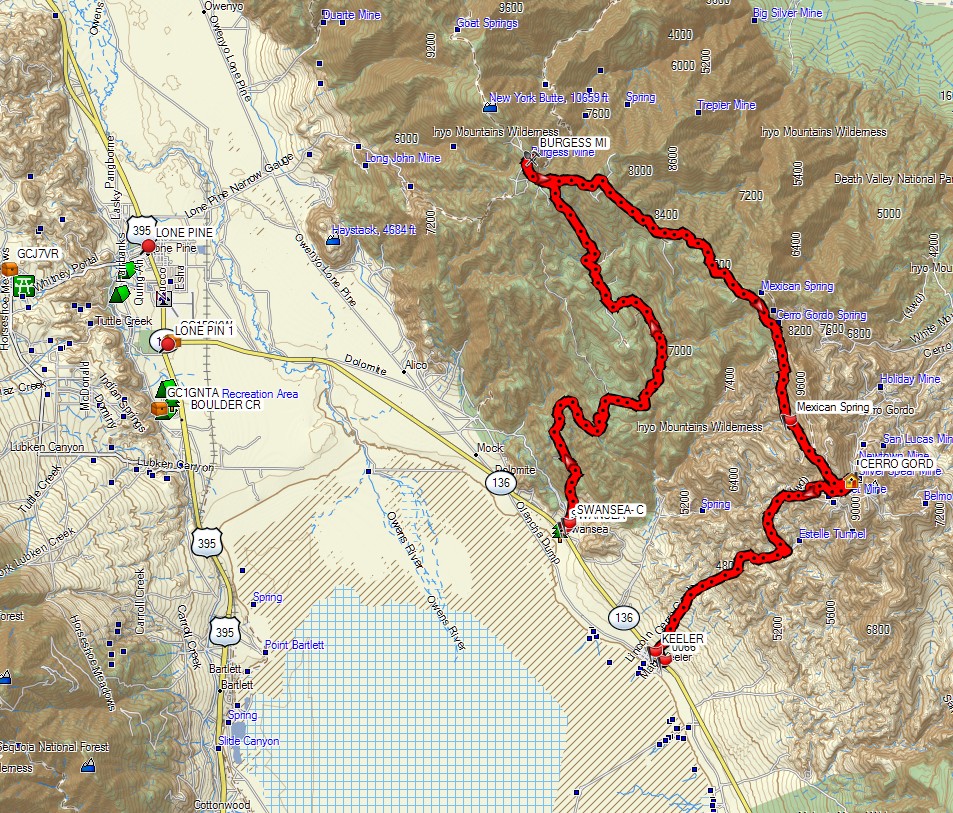 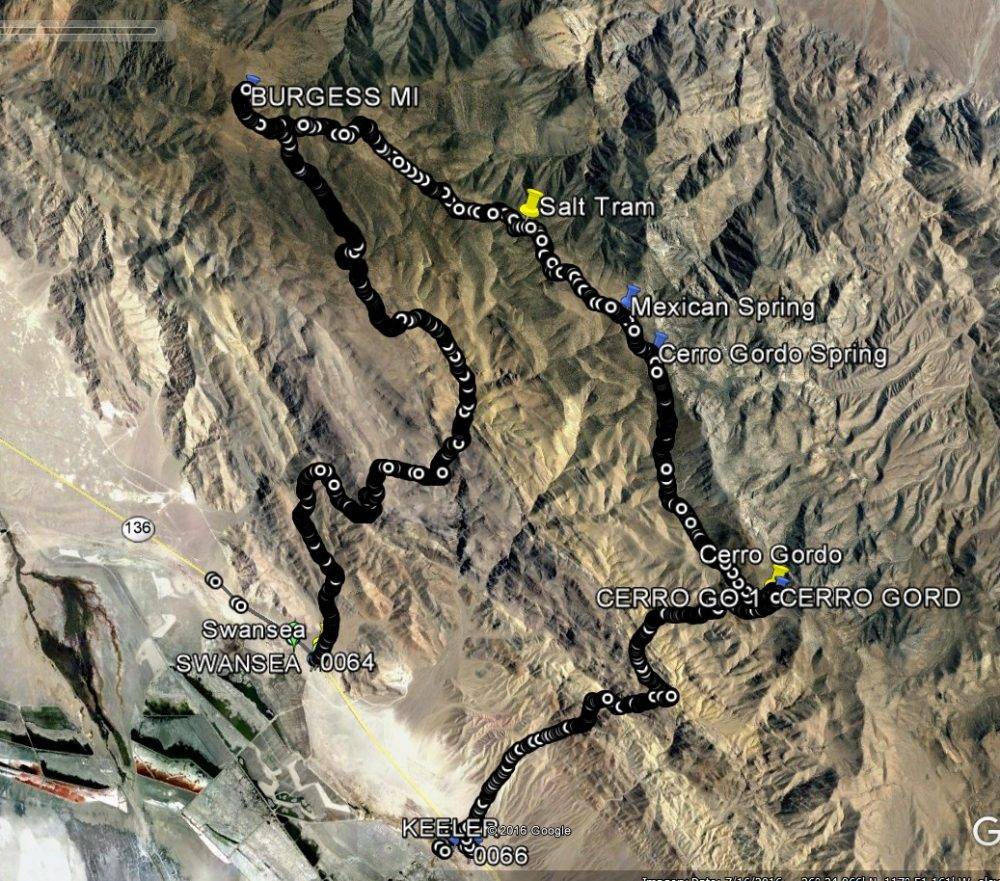 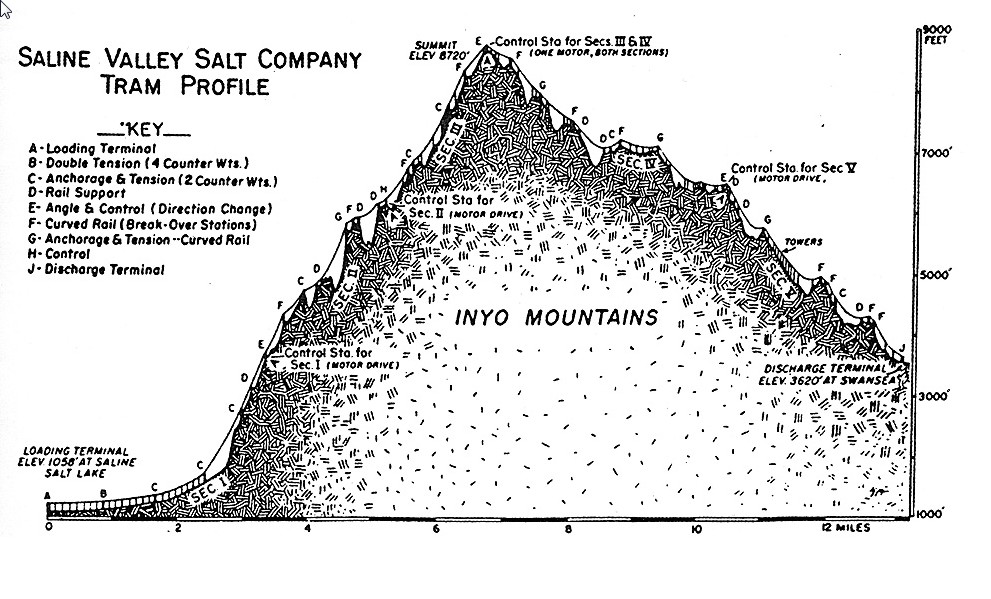