The Jacumba Border Trail is located in San Diego’s East County just to the west of I-8 exit 77.  The trail has some easy to moderate challenges and scenic terrain.  The trail is rated as a 1+ to 2.  Along the trail you might want to visit Smuggler’s Cave and the Elliot Mine before proceeding to within feet of the US/Mexico Border.

[I hate to be a buzzkill but vehicles are not allowed in the actual Valley of the Moon. There are multiple signs and maps that show that it is not a designated route and is in a Wilderness Area. People have been going out there but more and more they are realizing it is not allowed. Vehicles are not allowed to proceed east past the “End of Route” signs at 32.62930, -116.08106. Runs, plans, or pictures in the actual Valley of the Moon are not sanctioned by the club. – Admin, 10/28/2020]

9/6/2021 – We can’t run the southern loop near the border anymore. On last Saturdays run we came across a constructed block on the trail. It is at N32.62150° W116.09690°. It is on the southern loop that runs right next to the border for about a quarter mile. There are two boulders strategically placed. They are where the trail was already constrained by rock outcrops. I estimate the boulders are more than 6 tons each. There were relatively recent bulldozer tracks indicating that work had been done at this spot. This is on BLM land but it seems quite possible that USBP put them there. There were no posted signs. We didn’t check the other end of the loop but as Bob K deduced it seems likely that there is another block on the western part of the loop. A picture of the boulders is at https://g2.justruns.com/gallery2/v/Run+Photos/210904_jacumba_border_trails

We and other groups have been running this trail for years. The California Trail Map from five years ago shows this trail as being open to vehicles. The most recent version CTM shows it as not open to vehicles. The CTM is not authoritative. The best reference I know of would be the the BLM map:
https://www.blm.gov/sites/blm.gov/files/maps-avenza-california-western_imperial_county_routes.pdf
(The Elliot Mine area is on the second page, lower left corner.) That map appears to have been first published 11/7/2017. That map does not show this trail. Most BLM lands and specifically the In-ko-pah Mountains/Elliot Mine area are designated as “Limited Use”. Since this trail segment is not shown on the map that would mean that it is not an allowed route for vehicles.

But there are no signs at this trail. How hard would it be to put up signs? There are signs elsewhere in the area to indicate the ends of routes. Well, boulders are pretty effective even without signs.

Bottom line: We can’t take that southern loop anymore. We cannot plan or announce any runs, or publish any pictures that would suggest that vehicles are allowed on that segment of trail. 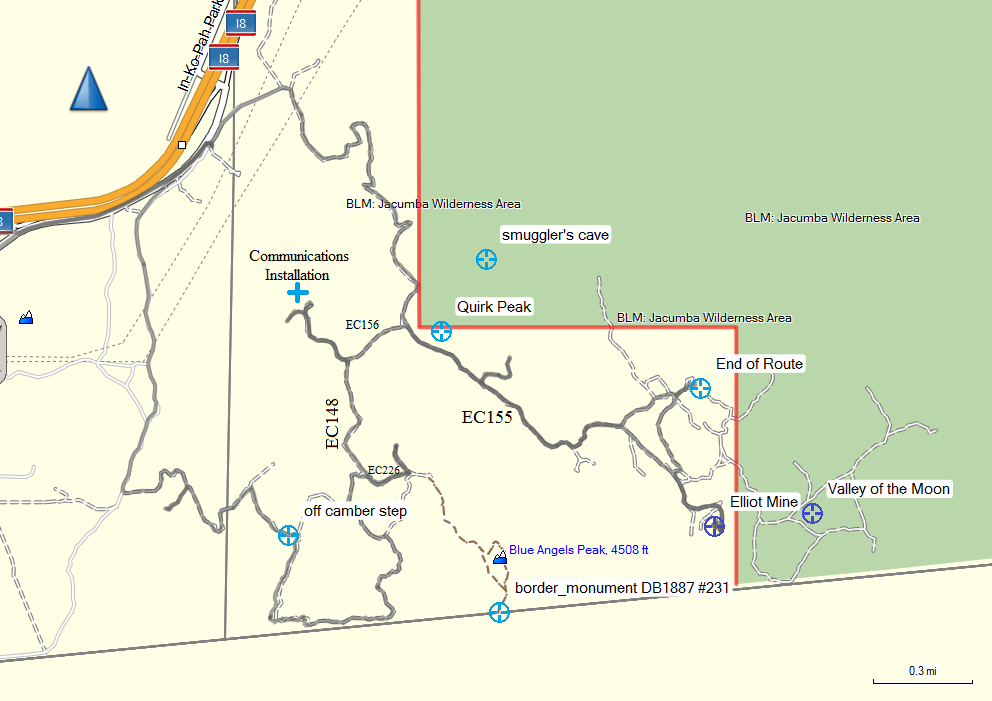 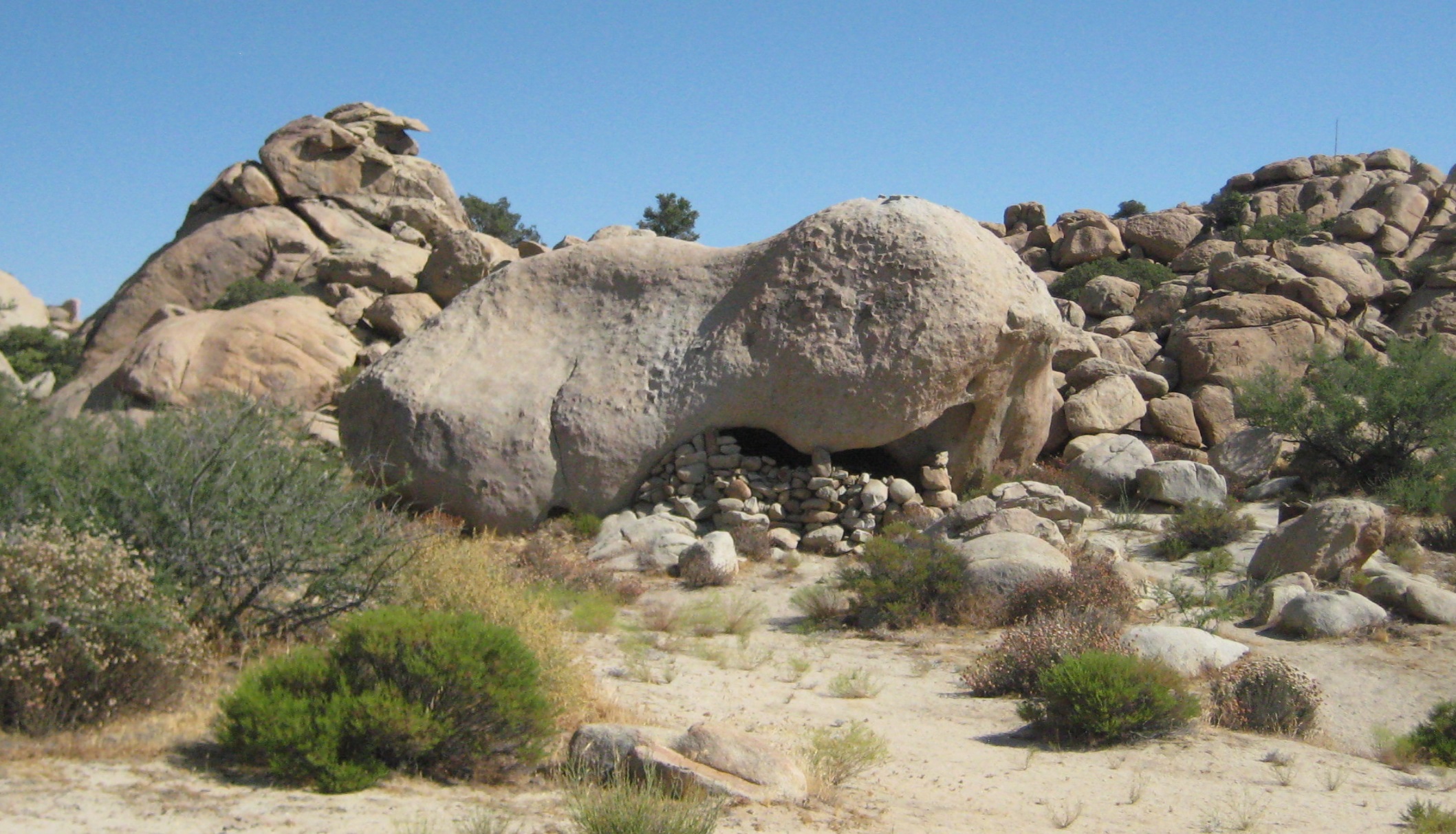 Smugglers Cave. (It’s a little hike off the vehicle trail.) 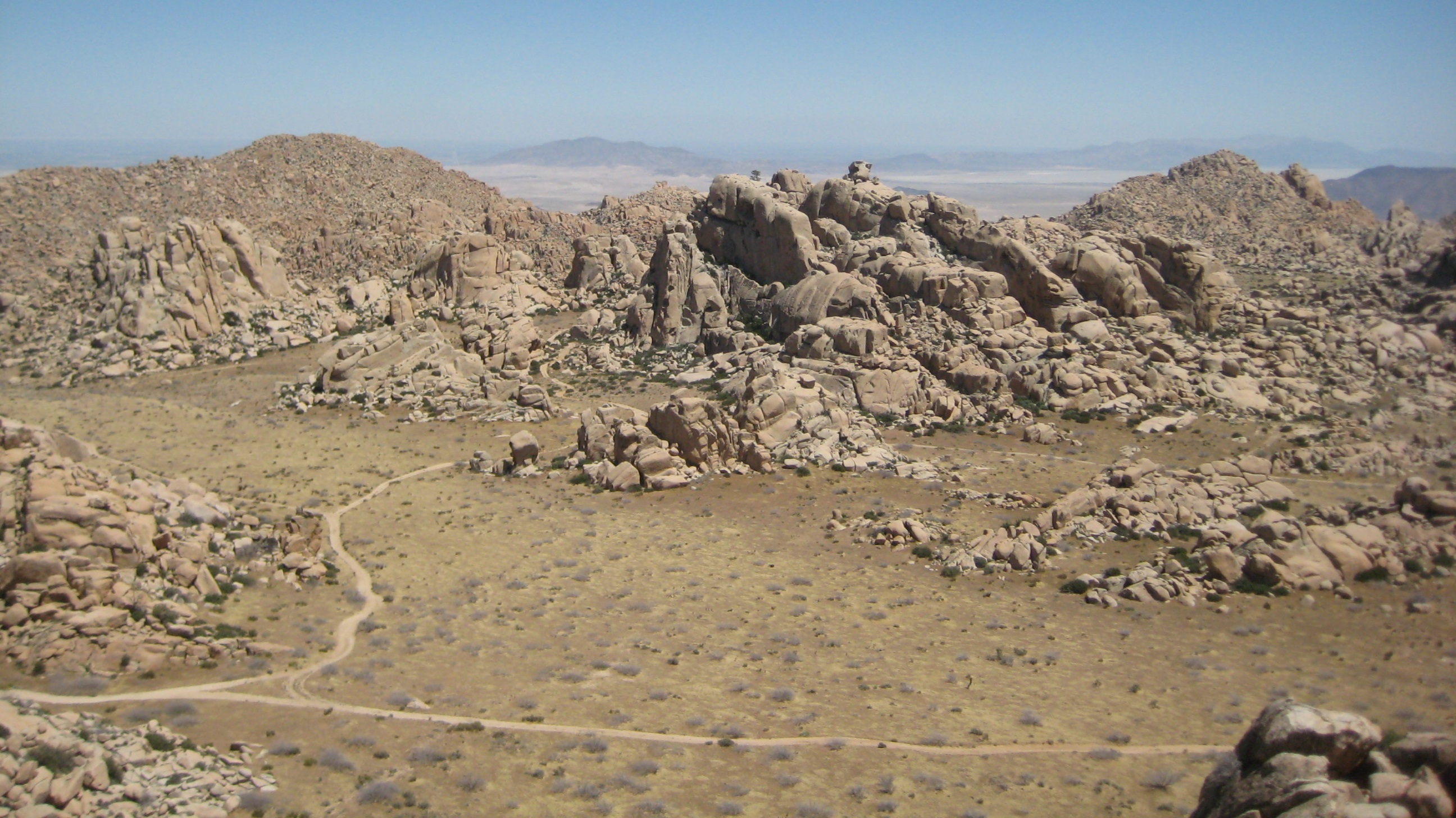 Valley of the Moon viewed from the Elliot Mine. 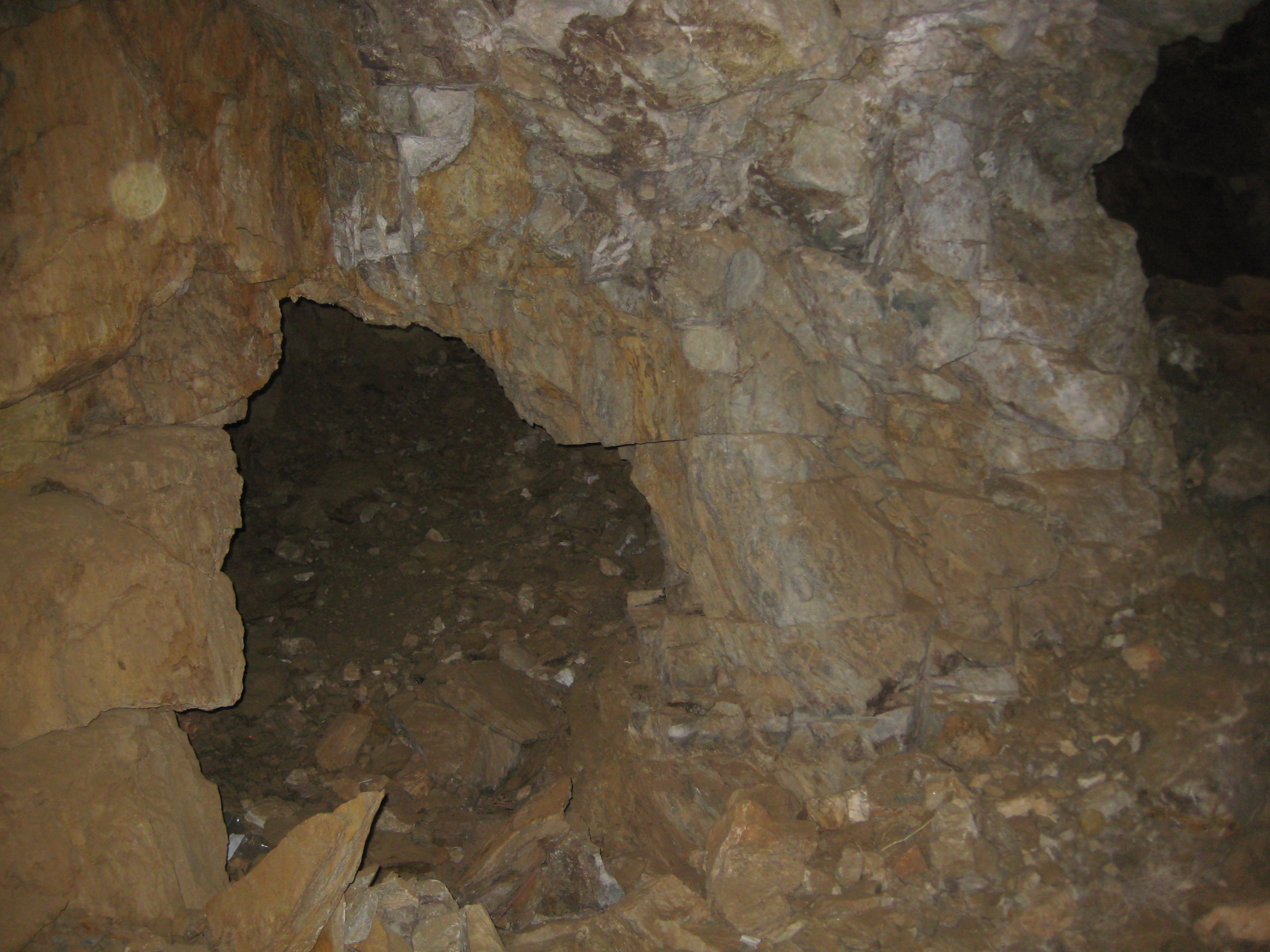 An adit of the Elliot Mine. All of the elliots have been mined out. During WWII they used the elliots to make bombsights.

Coming down from the Elliot Mine. 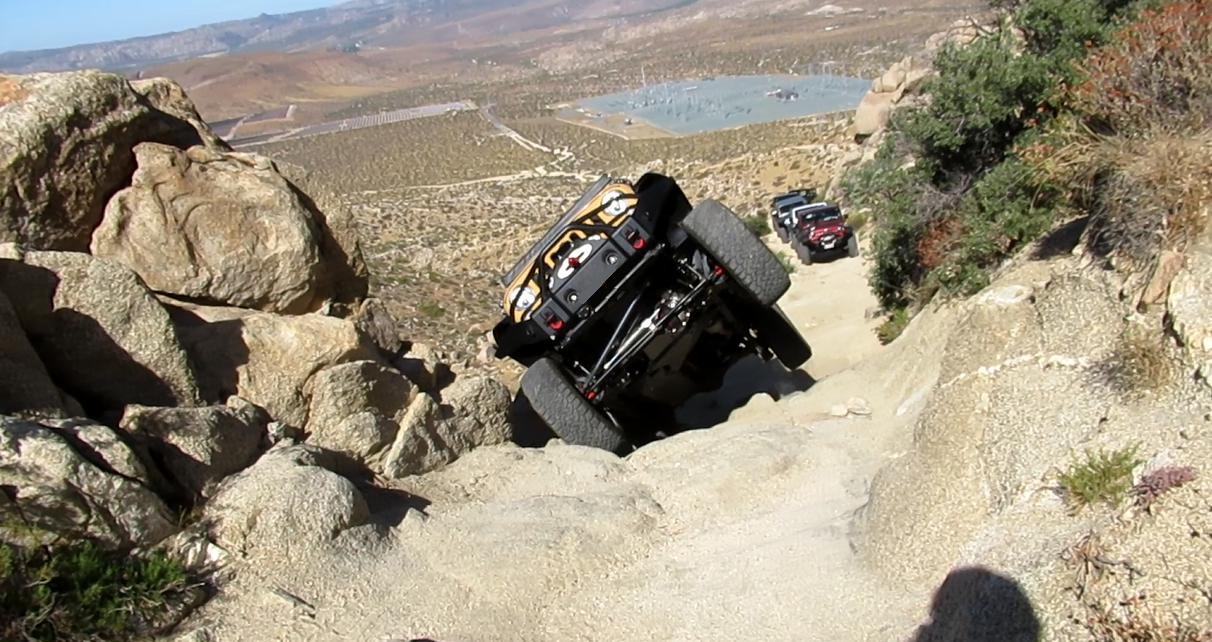 Coming up the off camber step. (Barry trying to make it look difficult.) 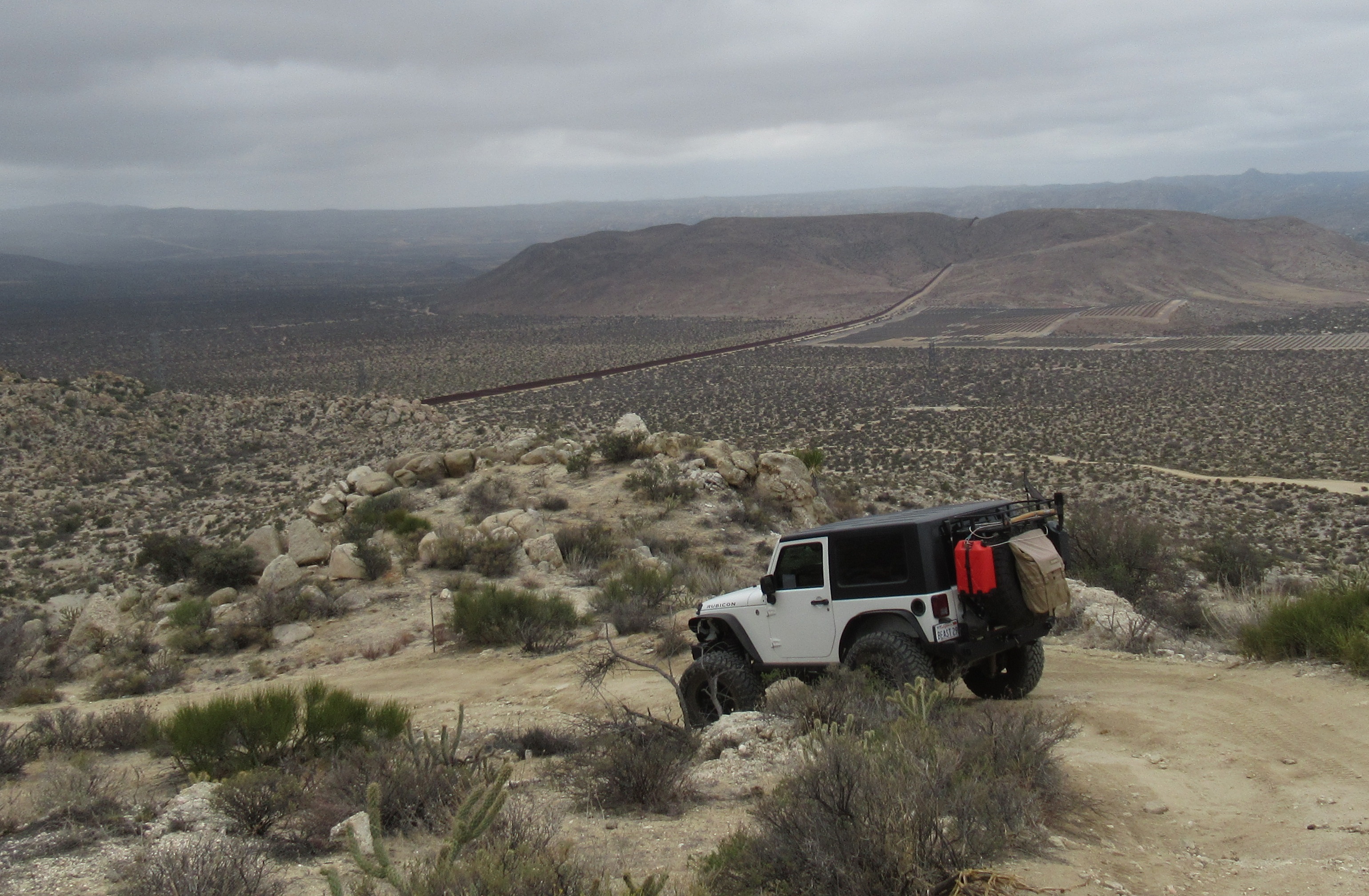