There are three trails that make a loop. They make a good day run. The main trails are the California Riding and Hiking Trail (CRHT), Mason Valley Truck Trail (MVTT), and Rodriguez Spur Truck Trail (RSTT). (USGS map) The CRHT is pretty mild and any high clearance vehicle can do it. A good part of the Mason Valley TT runs along the north slope of the Oriflamme Canyon. It is a rocky, narrow shelf road with a couple switchbacks. Fun stuff. The Rodriguez Spur TT is a notch or two above mild. There are a couple pretty challenging rock gardens by the side of Rodriguez Spur TT. The rock gardens are totally optional. 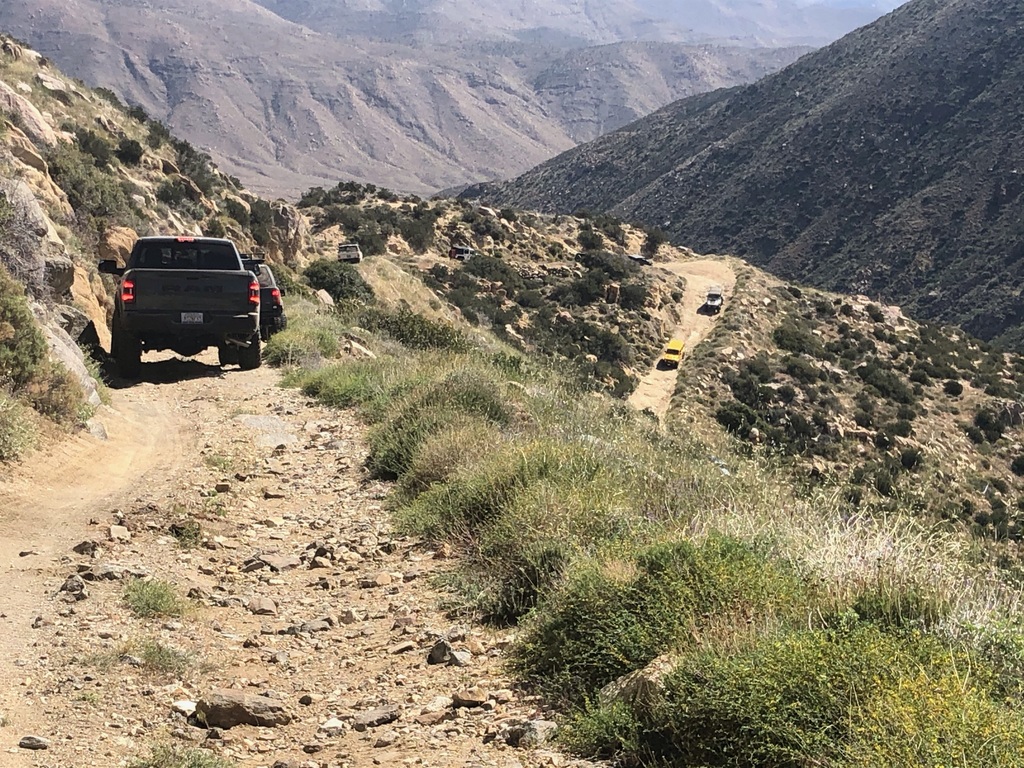 At the southern end of the loop you can optionally take the Mason Valley Truck Trail southeast to connect to county route S2.

The trailhead is on the opposite side of highway 78 from the Banner Store. The trail starts on the property of the 62 acre Banner Recreation Ranch. This is the California Riding and Hiking Trail. Quickly you come to a gate. There is a chain on it but it is not hard attached. Close the gate behind you.

Shortly you cross into BLM land. Most of the CRHT is on BLM land. It is mostly graded with some ruts.

Shortly the trail crosses into Anaza Borrego Desert State Park. After about a mile you have to make something of a left to stay on the vehicle trail (33.013339, -116.527229). Then after another 0.2 miles it connects to Mason Valley TT.

There is a two mile dead end section you can take to the west. (33.010417, -116.519592) It is mostly graded and pretty ordinary. The initial lower half mile can be pretty muddy in the winter and spring. It dead ends at a hard locked gate. (The “West Gate”?) There is an old concrete tank there. There is also a good view.

But skipping that you continue southeast on MVTT. Soon it starts descending and you’re getting to an interesting section. As I mentioned, a good part of the MVTT runs along the north slope of the Oriflamme Canyon. It is a rocky, narrow shelf road with a couple switchbacks. Fun stuff. Decent views too. 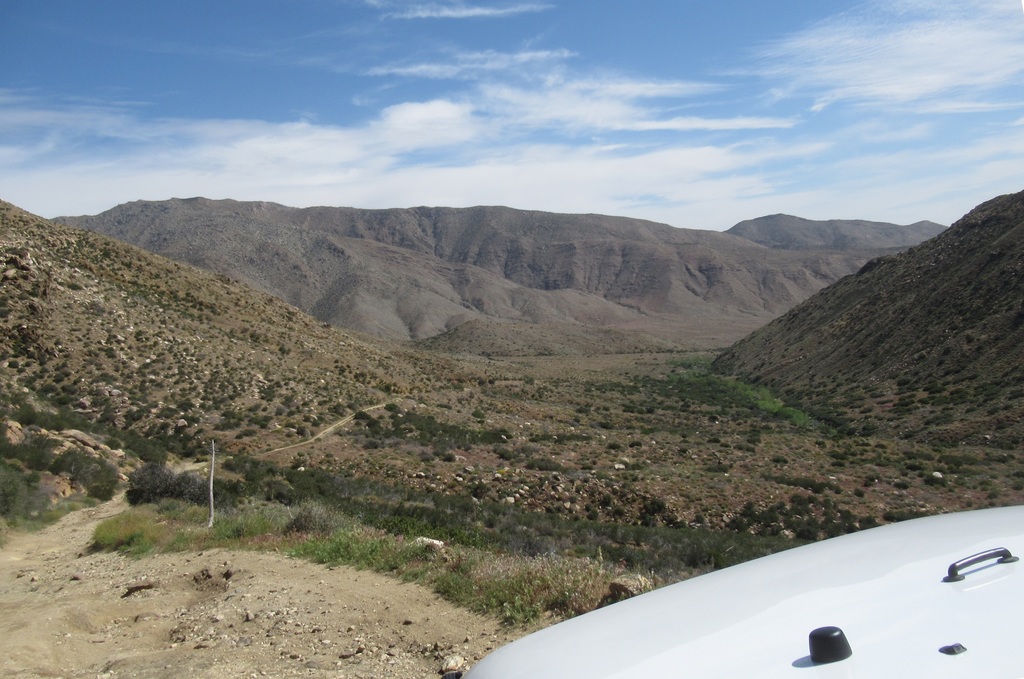 It descends to the west reaching the floor of Oriflamme Canyon. There is a nice wooded area there at N33.01462° W116.49327°. It is a nice place for lunch. There’s no shade after this point. Look at the tops of the boulders across the creek. There are Indian morteros. 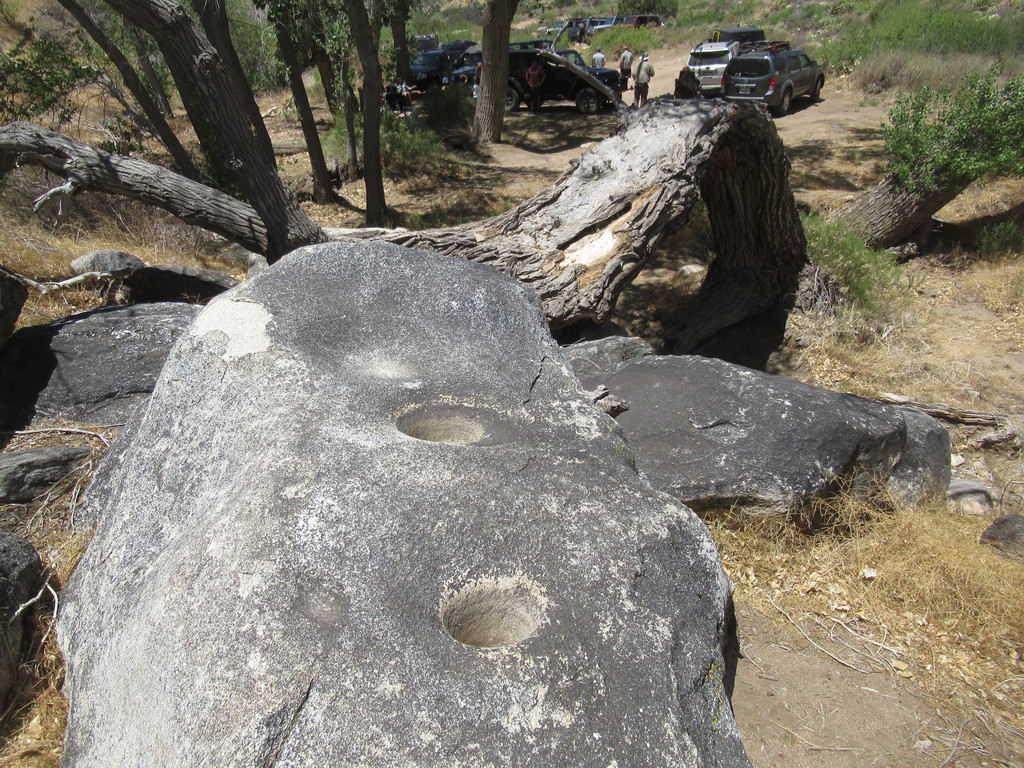 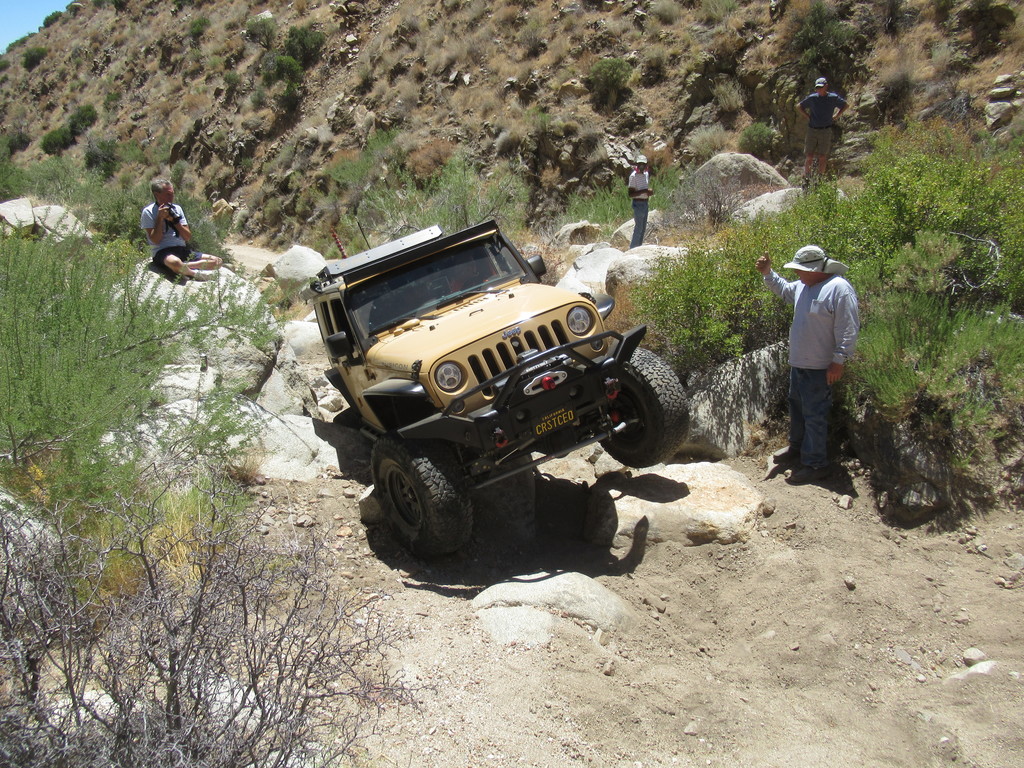 About a third of the way up RSTT there is a small cinder block building. It is often identified as Pandora Mine. A bit north of that you cross back into BLM land.

About 0.8 miles past the block house there is a side trail to the southwest. It climbs to a defunct tourmaline mine (N33.04412° W116.51665°). The trail is moderately steep, rutted, and a bit rocky. You can do it without lockers if you keep some momentum and if you take a decent line. It’s less than half a mile long. At the top there are a couple little loops. One is level 1+, the other about a 2. There’s enough space to get fifteen vehicles up there and turned around. There are diggings and tailings. Jeff G had met and talked with the operator years past when the mine was still operating. You can find bits of tourmaline around. There’s a decent view too.

Rodriguez Spur climbs for another half mile where it crosses the Pacific Crest Trail. Then the surface is basically graded as it descends.

The trail passes through some private land. You are allowed through there. There are unlocked barbed wire gates at the entrance and exit. Close them behind you. Drive respectfully on private land.

The trail continues meet the CHRT and complete the loop.

We’ve usually done the loop counterclockwise but it can be run in the other direction too. 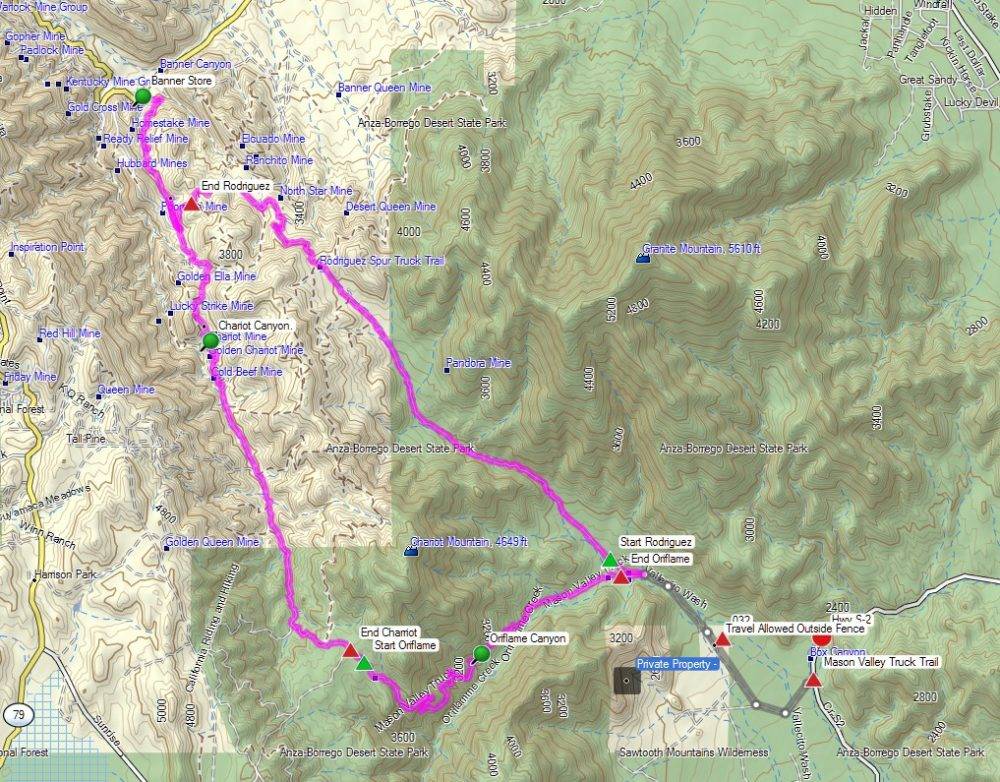 Some History on Oriflamme Canyon 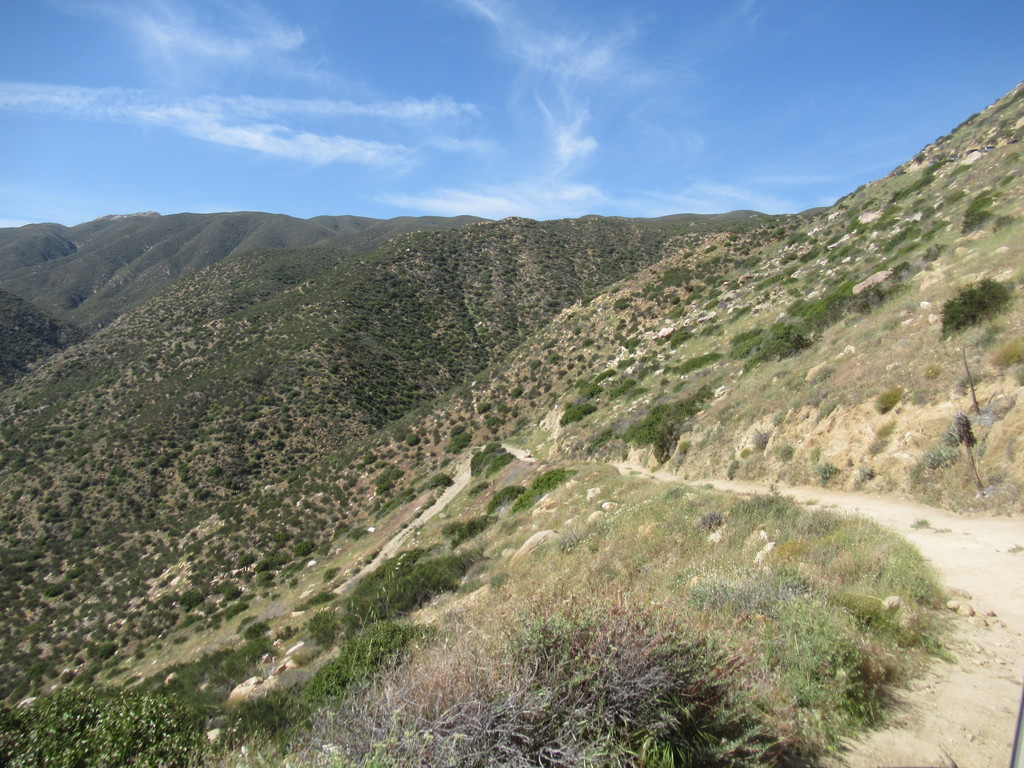 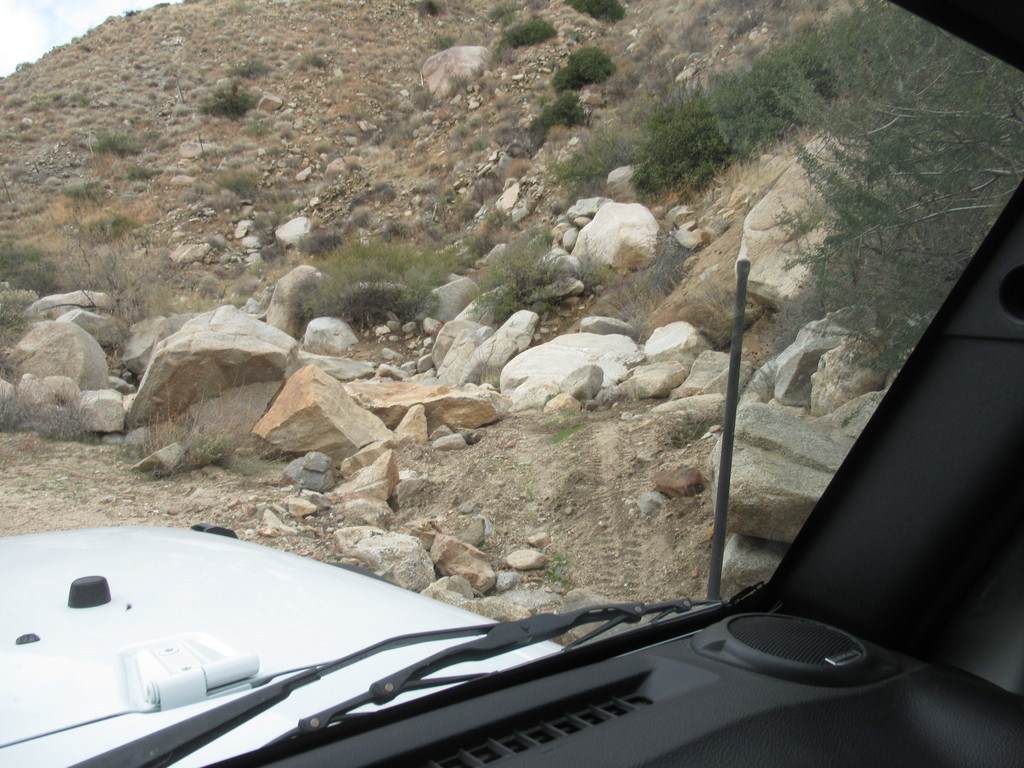 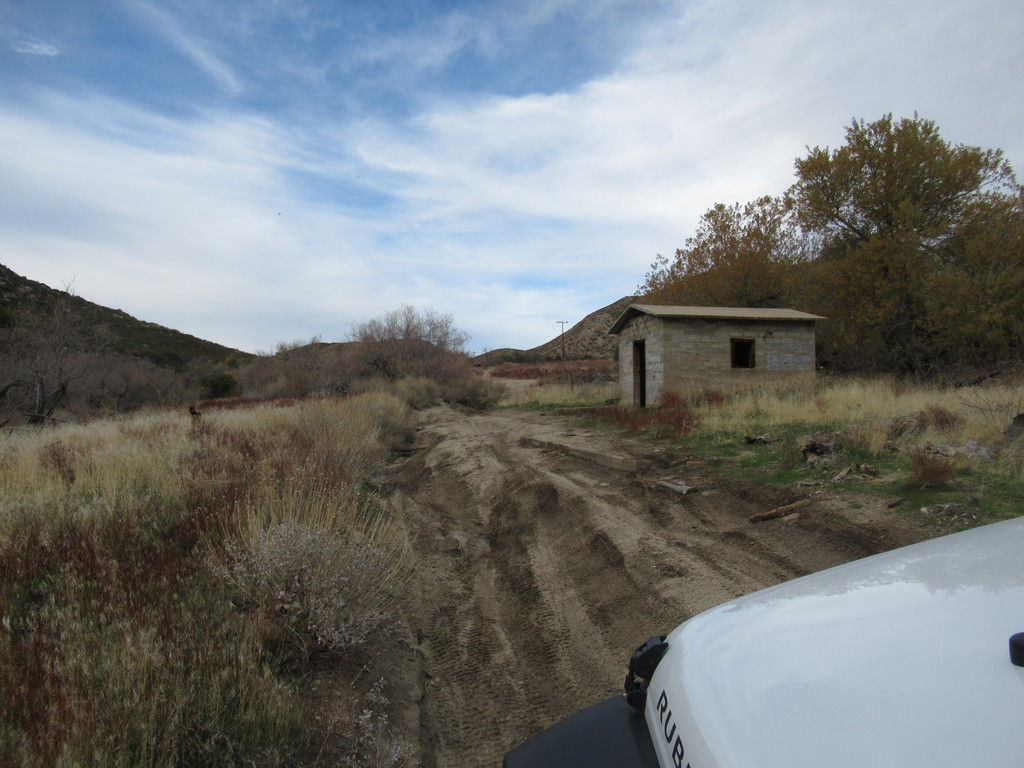