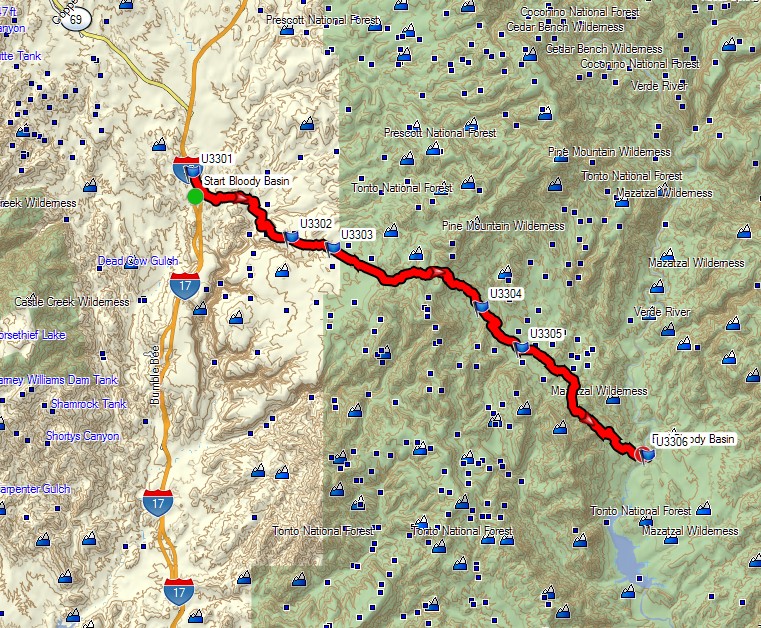 Trail Description
This trail was high-clearance 2WD when we ran it (people with Ford Escapes were doing it), but it could wash out easily with heavy rains.
General Information and History

The area around Bloody Basin Road was named for a series of skirmishes between the US Army and Tonto Apache. The Tonto Basin Campaign was organized by General George Crook in an attempt to stop the numerous small fights between settlers and Apache and Yavapai in central Arizona in 1871. The campaign set out to force the native population to return to the dreaded reservations.

The Battle of Turret Peak was the turning point of the campaign and broke the backs of the Indians and their resistance to white settlers in the region.

Capt. George M. Randall, 23d Infantry, led a small group of Army scouts to Turret Peak where the group of Tonto Apache were camped. On March 27, 1871, the soldiers crept up the side of Turret Peak on their hands and knees to avoid making any noise or sending rocks skittering down the mountain. Capt. Randall waited until dawn before he attacked.

So surprised and panic-stricken were the Indians that some of them jumped off the precipice to their death. In the end, over twenty Indians were killed and most of the remaining were captured. The survivors were returned to the reservations and within two weeks, many of the demoralized Yavapai and Apache surrendered to General Crook at Camp Verde. Several soldiers received the Medal of Honor for their participation in the battle (the criteria for this award was different than what it is today).

For more information about the Turret Peak battle, what caused it and the Tonto Basin Campaign, see the Battle of Turret Peak page.

Click here to go to a picture of Bloody Basin Road at Cordes Junction from 1947 from the Arizona Memory Project.

The trail starts at exit 259 at the intersection of I-17 and Bloody Basin Road. Follow the specific GPS waypoints to get to FR24 and Sheep Bridge trail. Again, I usually have much better trail descriptions, but we ran this at night and as fast as we could just to get out.

Follow Bloody Basin Road. There will be multiple roads leading off in either direction (many of which are not details in the trail description). For the most part, stay on the most traveled road. Please see maps for more information.

At Waypoint 0002, you will cross the concrete ford at the Agua Fria River. This may be impassible during heavy rains. At Waypoint 0003, keep right as the road tracks to the south.

You will cross Bishop Creek at Waypoint 0004, then Copper Creek shortly after. At Waypoint 0005, keep straight. The left is FR677, part of the Great Western Trail. Numerous tracks lead off in both directions between here and Waypoint 0006.

At Waypoint 0006, you will begin a steep descent down into Blood Basin. Keep on the main road for a number of miles until you reach Waypoint 0007 (Sheep Bridge and FR24).